Unless a buyer swoops in, the Burger King owner is set for a big break-up. That’s good news for weary investors

It’s the end of an era — and probably the end of the road too — for empowerment group Grand Parade Investments (GPI).

This month saw the retirement of embattled chair Hassen Adams at the AGM.

The combative Adams did not go gracefully into retirement, having railed long and hard against recent efforts by shareholder activists to influence strategy in order to unlock value.

Adams’s departure now leaves GPI’s fate firmly in the hands of a group of seemingly like-minded shareholder activists — of which turnaround specialists Value Capital Partners (VCP) is the biggest.

The FM has little doubt that shareholders will look to extract value from GPI rather than extend its tenure as a small black-owned investment company.

At long last, however, Grand Parade shares have begun to shrug off the lethargy of the past few years.

Earlier speculation in the FM has now been reinforced by GPI’s announcement that it is to sell down its 91.5% stake in Burger King.

Following the sale of a remaining 30% stake in limited payout machine (LPM) business Sun Slots, GPI is left with Burger King as well as significant minority stakes in SunWest and Spur and a potentially valuable head office property in the Cape Town CBD.

Jarred Winer, a director of one of GPI’s activist shareholders, Westbrooke Alternative Asset Management, says that in the event of an “attractive” offer for Burger King “GPI will need to re-evaluate the investment holding company … the optimum way to unlock the deep discount to intrinsic NAV will be through further asset disposals and returning of capital to shareholders.”

While Adams has taken flak for being obstructive and divisive, his tenure should also be remembered for some smart dealmaking that rewarded GPI’s original shareholders richly.

Most notably, he snaffled a very lucrative empowerment deal with Sun International around its Western Cape-based subsidiary SunWest — the owner of the cash-spinning GrandWest casino.

He did some slick leveraging at Real Africa Holdings, an investment company that held minority stakes in mainly Sun International-owned casinos. Adams also made a smart investment in the LPM sector at a time when most punters dismissed this alternative gaming format as a poor cousin to the casino sector.

Adams was also not afraid of making audacious bids, having flirted with buying a controlling stake in the then debt-laden Peermont casino group and taking a tilt at fast-food franchiser Spur Corp.

Unfortunately, his determination to lighten up on gaming to shift into the fast-food sector was ill-timed and ultimately turned shareholder sentiment against him.

Adams has been the prime mover (and a major shareholder) at GPI since the group’s formation in the mid-1990s. 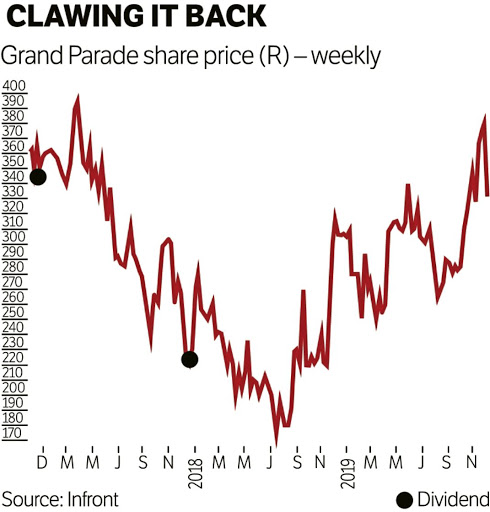 If GPI indeed morphs into a small investment company with a handful of investments, there seems scant chance the huge discount applied to the intrinsic NAV will be narrowed.

What’s more, GPI does not have the balance sheet to chase new investment opportunities, nor can it raise fresh capital by issuing shares at current desultory levels.

There is some conjecture around exactly how much value can be unlocked.

The FM reckons intrinsic NAV sits between 525c and 585c a share.

Ricco Friedrich, a partner at Denker Capital (another activist shareholder in GPI), concurs. “There is still plenty of upside … probably north of 500c a share.”

The higher figure depends, of course, on how well the casino assets can be marketed. GrandWest, which is enjoying an extended monopoly in Cape Town, is arguably the best casino asset in SA. The investment paid out R64m in dividends to GPI in the past financial year, and the FM cannot imagine this cash-spinning investment being let go at anything below R1bn.

The Worcester casino, while small, has potential strategic value, bearing in mind that the Western Cape government has been mulling over the relocation of one of the existing provincial casino licences to the Cape Town metropole.

It’s no small irony that Grand Parade may sell Burger King just as the chain starts making money: it managed a bottom-line profit of R12m in the year to end-June.

Speculating about how things might eventually pan out is an intriguing exercise.

Recently, Brian Joffe’s investment company Long4Life (L4L) has found an appetite for food assets and has already snapped up an influential stake in Spur. It’s difficult to believe L4L won’t at least take a look at Burger King.

On possible pricing, developments at fast-food brand owner Taste Holdings — where investments in global brands Starbucks and Domino’s turned sour — have probably ruined GPI’s chances to get back the close to R1bn (including accumulated losses) of costs sunk into Burger King.

Some might argue that Burger King, which should have close to 100 stores next year, has found traction. But even if bottom-line profits double over the next three years — which is probably unlikely, considering the thriftier consumer — returns still won’t justify the development costs.

The FM has little doubt that Sun International, despite its determination to ease its debt, would happily gear up to secure the reliable cash flows from GrandWest and keep its strategic options open in the Western Cape by mopping up Golden Valley.

A possible curve ball could be if a larger empowerment company covets GPI’s assets, pitching a buyout offer that would preclude the strains of selling off individual investments.

But at this juncture it might only be Hosken Consolidated Investments that might contemplate such a move, remembering that its gaming subsidiary Tsogo Sun already holds a minority stake in GrandWest and Golden Valley.

Whatever the eventual permutation, GPI shareholders should see some price action in the first half of 2020.

Can I use debt or gearing to make an investment into a S12J company?

Yes, you may utilise a loan / gearing to make an investment into a VCC, subject to complying with Section 12J(3)(a) of the Income Tax Act.

What is the size of the S12J industry?

How long does the S12J incentive last for?

The VCC regime, introduced in 2009, is subject to a 12-year sunset period that ends on 30 June 2021. The upfront income tax relief will only apply to VCC shares acquired on or before 30 June 2021. The sunset clause is to be reviewed, and may be extended thereafter.

What is the term of my investment?

The term of the investment will be a minimum of 5 years, with a realization period of up to 18 months thereafter (if required).

What is the annual limit per investor for subscriptions into a Section 12J company?

There is an annual investment limit of R2.5m per individual / trust and R5m per company.

Can the tax relief be recouped by SARS?

Your Section 12J deduction will only be recouped (and the tax relief withdrawn) if:

What do I need to give SARS or my Tax Advisor to claim the deduction?

When investing, Westbrooke will provide each investor with a tax certificate which is used as evidence of their investment into an approved Section 12J company.

How can I obtain my tax relief?

Investors can claim their tax relief by either reducing their estimate of taxable income when submitting provisional tax returns or by obtaining a tax refund through the annual income tax assessment.

When can the tax deduction be claimed?

An investment into an approved Section 12J company is 100% tax deductible in the tax year you invest.

What is a Section 12J company?

A Venture Capital Company as described in Section 12J of the Income Tax Act, which came into operation with effect from 1 July 2009. Section 12J is a tax-based incentive designed to encourage individual and corporate investors to invest in a range of small and medium size companies by investing through Section 12J.

The aim of the incentive is to create a pool of passive investors who obtain an upfront tax deduction for investing with a manager who is responsible for making investments which stimulate the South African economy and create jobs.

Take me on a learning journey